Fruitland, Md., is a small city, centrally located on Maryland’s Eastern Shore. Like many cities on the Eastern Shore, the area has generally sandy soils and a high groundwater table and has experienced elevated growth throughout the past few years. However, the increased flows at the wastewater treatment plant seemed to outpace development. Fruitland currently provides sanitary sewer service to approximately 4,000 residents. The wastewater treatment plant was nearing its 3.03 million L/d (800,000 gal/d) capacity but could not justify an expansion based on its number of users. Instead, the city decided to attempt to regain capacity by repairing the aging infrastructure.
Based on the increasing peak flows following rain events and 30 years of experience, the city’s Director of Utilities, Joseph Derbyshire, recognized that significant infiltration and inflow (I/I) was entering the sanitary sewer system through leaking brick manholes, cracked pipes, offset joints, and lateral-to-main connections. Fixing this problem kicked off a large undertaking in a small city.

To recapture capacity at its wastewater treatment plant, Fruitland, Md., used cured-in-place liner to reduce inflow and infiltration to 3292 m (10,800 ft) of sewer line and sealed and coated the walls of 122 manholes. Bryan Adkins/George, Miles & Buhr

The city’s sanitary sewer infrastructure dates back to 1970 and consists primarily of terra cotta pipes and brick manholes. Decades of deterioration have taken a toll on the manholes and sewer mains. Over the years, the walls of the brick manholes provide the path of least resistance to the area’s high groundwater table. In particular, the mortar was deteriorating due to the corrosive environment within the manhole. Likewise, the terra cotta pipes are brittle and allow roots to intrude through cracks and joints.

A bright spot for Fruitland was that all sewers installed since the mid-1980s are made of polyvinyl chloride with concrete manholes. Their newer and more robust collection elements allow significantly less I/I to enter the system.

In 2007, Fruitland teamed with George, Miles & Buhr (Salisbury, Md.) to identify areas with high I/I and design the rehabilitation measures. The city and consultant applied for grants from the Maryland Department of the Environment for the construction portion of the project, and the city was awarded $600,000 from the Bay Restoration Fund. This money is distributed by the State of Maryland to improve the water quality in Chesapeake Bay through
upgrades to wastewater treatment plants, septic systems, and sanitary sewer systems. The project was divided into two phases: manhole rehabilitation and pipeline rehabilitation. Initially, each phase was designed to utilize $300,000 during construction.

The city selected manholes for rehabilitation based upon age, condition, and depth. The goal was to include the manholes where the invert is at the deepest elevation, even if the manhole is relatively shallow. Manholes located on the west side of the city toward the Wicomico River also were given high priority.
In many instances, grout was missing from between bricks, and active, steady infiltration was visible. All of the manholes already had watertight inserts to guard against direct runoff inflow. The Phase 1 construction bid package included six priority levels. Priority levels ranked the areas with the greatest need for rehabilitation, and the bid package was divided so that a low-priority area could be eliminated if the budget was exceeded. The manhole rehabilitation included surface preparation, followed by three layers of lining. Preparation included water blasting and grouting any significant voids. The first layer of lining was a moisture barrier of silicone-modified polyurea. The second layer was a surfacing coat of polyurethane foam to fill all voids. The final layer is a corrosion-resistant barrier of silicone-modified polyurea.
Each manhole was stamped with the installation date. At the completion of the project, a visual inspection of every manhole was performed to identify any leaks or defects. The manhole linings included a 10-year warranty. All six priority areas were completed for a total construction cost of $285,000. Phase 1 rehabilitated 122 manholes, which totaled more than 366 vertical m (1200 vertical ft) — the project was bid by vertical foot, measuring from manhole invert to frame elevation — or approximately 1433 m2 (15,430 ft2) of surface area. 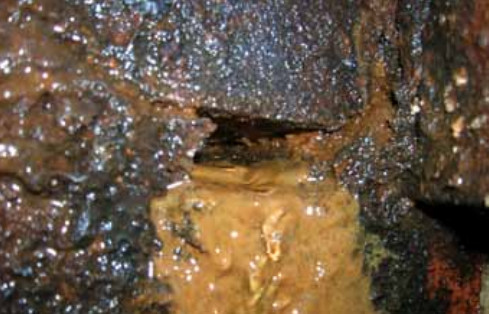 Before rehabilitation, a steady flow of infiltration entered
several of Fruitland’s manholes. 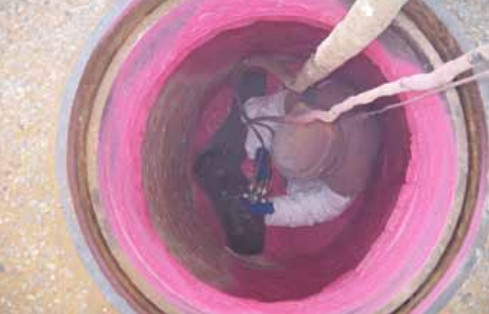 Manholes received three layers of coating — a moisture barrier, a foam to fill voids, and a corrosion-resistant barrier.

During design of Phase 2, the city received an additional $200,000 in grants from the Bay Restoration Fund on top of the initial $300,000. Near the end of construction of Phase 2, the Maryland Department of the Environment Supplemental Water Quality and Health grant awarded another $100,000. The total allocated for both manhole and pipeline rehabilitation equaled $900,000. To identify and prioritize which sewer mains to rehabilitate, the city used its own closed-circuit television (CCTV) inspection system, which was operated by Dwayne Dowell. The city provided videos and inspection logs to the consultant for review and prioritizing. The inspections revealed offset joints, root intrusion, and cracking. For example, in one area with relatively shallow terra cotta mains — only 1.8 m (6 ft) deep — one pipe section had a severe offset joint of approximately 76 mm (3 in.). The consultants developed a construction plan that included a list of lines to be repaired broken down by street and main size. The sewers were located in both city roads and state highways. The contractor would be responsible for bypass pumping and traffic control, as well as dewatering to lower the groundwater table, as needed.
The city selected AM-Liner East Inc. (Berryville, Va.) to complete Phase 2. The project included rehabilitation of 3292 m (10,800 ft) of pipeline, ranging in size from 200 to 450 mm (8 to 18 in.) in diameter. The total contract price was $618,000. The pipes were rehabbed with cured-in-place pipe (CIPP), using water or steam cure. The contractor cleaned the mains, removed roots, and performed a prelining CCTV inspection of each main to identify the defects and document the lateral locations. A post-lining CCTV inspection was also performed for each main after the laterals were reinstated. All of the mains were able to be lined, including the one with the 76-mm (3-in.) severe offset joint. The post-lining CCTV videos were reviewed by the project team to identify leaking lateral-to-main connections. In total, 147 laterals were reinstated after CIPP installation. Of those, 60 received a lateral insert (“top hat”) or grout. The insert extended approximately 300 mm (12 in.) into the lateral and completely sealed the connection of the lateral to the main. Inserts were installed in laterals that had active, visible infiltration. The lateral-to-main connection was found to be a significant source of infiltration. Phase 2 was completed in November 2010. Downstream, the treatment plant has seen lower flows and higher pollutant concentrations in wastewater. The overall results are that, at this time, a treatment plant expansion is not necessary. Amanda H. Pollack is an associate and senior project manager at George, Miles & Buhr (Salisbury, Md.). Joseph P. Derbyshire, director of utilities; George Calloway, wastewater treatment plant superintendent; and Dwayne Dowell, CCTV truck operator, were integral to the success of this project.