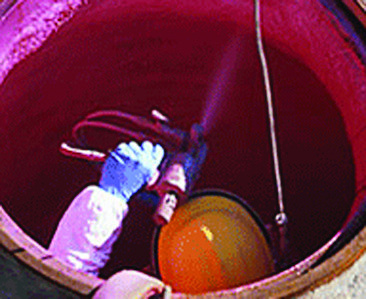 When JEA set out to rehabilitate 300 miles of deteriorated sewer pipeline using pipe bursting and other trenchless methods, a second aspect of its service area was also addressed. As poor as the sewer lines were, the manholes weren’t in much better shape. Amongst the 3,000 miles of sewer lines in JEA’s service area, there are approximately 60,000 manholes. Of those, approximately 6,500 were deemed unacceptable and designated for relining. JEA officials use the same language to describe the manholes as they did for the sewer pipe – none of which are positive terms. As with the sewer lines, the majority of the manholes are in the older sections of Jacksonville and its surrounding area and are approximately 50 years old or older; they are primarily made of brick or pre-cast concrete. Comparing the condition of the sewer lines to the condition of the manholes, not much of a difference can be found.
“They were just as bad as the pipes,” said Ken Crawford, JEA sewer maintenance manager. “The mortar in the manholes was chalk; it held the bricks in and the bricks were falling into the inverts. When the guys would jet the lines to pull the bricks up the lines, we would get jet heads hung up in the bricks. Then we would have to dig those up. It was just one thing after another.” But before any relining of the manholes could commence, there were additional problems that needed taken care of first.

“The manholes had to be somewhat structurally sound before we could line them,” said Robert Kermitz,JEA manager of joint projects. “Lots of the manholes had to have some structural repair done before the lining could take place.”
“A lot of these brick manholes had bad infiltration. They were leaking … Mortar was missing from the bricks and some even had bricks missing,” said Sims Rhyne, president of CCI Spectrum, which provided the technology, SpectraShield, used to reline the manholes. “JEA’s concern was that now that they had rehabbed the pipe and eliminated the infiltration of the pipe, that they would be putting new pressure on the manhole and that the manhole was going to leak. JEA wanted to eliminate that infiltration to tighten the system up.” JEA had attempted to reline the manholes in the past, but officials weren’t satisfied with the results. “We tried some products over the years with our in-house crews,” Kermitz said. “We had private companies come in with some pilot projects but none of them worked. We’re still seeing today that the old product is peeling off the walls.” 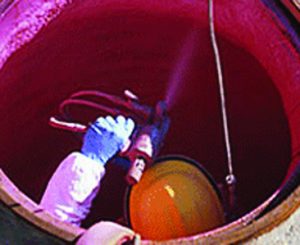 When JEA Decided To Do Something About The Condition Of Its Sewer System, Some 6,500 Manholes Were Also Included In Those Plans.

JEA’S plan was to reline the manholes simultaneously with the pipe bursting work to keep the high-volume, fast pace of the rehabilitation project on track. “If we had all the pipes corning into that manhole being rehabbed, the manhole was to be rehabbed,” Crawford said. “If for some reason we left an old line coming into a manhole that may be replaced in the future, we would not rehab the manhole.” “Typically when JEA would finish an area [using pipe bursting], they would call us and we would go in and rehab the manholes after the pipe was put in,” Rhyne said. “And then any restoration work would be done and they would close out that particular project.” In 2000, JEA contracted a joint venture of PM Construction and Kinsel Industries, both of Houston, to pipe burst the sewers in designated areas of its service area. Also part of this contract, the joint venture subcontracted the manhole rehabilitation until 2002, when JEA put that scope of work out for competitive bidding. The decision to bid the manhole work was based on the potential for cost-savings and to increase the flexibility of JEA to utilize the technology. The bidding was open to all types of manhole relining: fiberglass, cementitious, spray-ons, etc. “We set some specific criteria and if a line was 24 inches or larger, we required fiberglass inserts,” Crawford said. “If a force main entered the manhole, we required at least a urethane liner. Cementitious and urethane liners were allowed to bid on everything else. “As luck would have it, in our opinion, the urethane liner came out with the low bid, and they have a superior product to the cementitious liner and they ended up doing the work for us,”he said. JEA was familiar with CCI Spectrum’s work and its technology, having worked with its subsidiary contracting company, Concrete Conservation Inc., Jacksonville, in the past on operations and maintenance manhole work and through the joint venture contract with PM Construction and Kinsel Industries. JEA contracted through the competitive bid process with Concrete Conservation Inc. (CCI) for a $3 million, two-year contract (with three one-year renewals) to rehabilitate the manholes designated along the pipe bursting routes using CCI Spectrum’s patented SpectraShield lining process, a multi-layered poly resin liner system that provides the latest in composite technology. CCI is a licensed installing contracting company of the SpectraShield technology and a subsidiary of CCI Spectrum Inc., which developed and patented the technology for manhole rehabilitation. SpectraShield is a system that, once applied to the structure, has a total thickness of about ~ of an inch depending on the degradation that has occurred to the structure. The new lining enhances structural integrity and prevents any further corrosion to the structure, plus provides the owner with a 1O-yearwarranty.A two-person crew can line a 6ft deep manhole in under an hour, Rhyne said. Key for JEA in selecting CCI Spectrum was its lO-year warranty, which is not offered by any of the cementitious liners or other lining methods, JEA officials said. “Of course we are only three years into some of that and only time will tell,” Kerrnitz said.”But so far,we’ve had great performance. Some of the older cementitious liners, within a year, they would be coming off the walls.And we’ve had very few problems of what we call ‘the pink stuff.’ [CCI’s] liner looks like Pep to Bismol so when you pop a manhole, you know if it’s been rehabbed or not instantaneously.”

JEA contracted with CCI Spectrum to reline some 6,500 manholes as part of its sewer rehabilitation project. Using the SpectraShield process, only about 500 manholes are left to be relined. Here, the before and after is shown.

Jacksonville-based CCI Spectrum Inc. was formed in 1989 by Jamie Hume to develop and provide solutions for the aging wastewater systems in the United States. Hume grew up in the resin and plastics business, working summers and after college for his father’s business. After several years, he went on to work for a local underground utility contractor where he learned of the corrosive environment in wastewater systems. After a few years, Hume started his own business in 1989 and began research and development on the latest resin technologies. He developed products to suit the requirements of the wastewater environment and was able to provide owners with a warranty they could depend on. In 1993, Hume introduced SpectraShield. Rhyne said the lining system is a multi-layered stress skin panel system composed of a moisture barrier (a modified polymer), a surfacer (a polyurethane/polymeric blend foam) and a final barrier coat (a modified polymer). “[Hume] saw the number of problems that existed in sewer rehabilitation and the deterioration of both concrete and brick structures due to hydrogen-sulfide gas and all the elements that take place in the collection system,” Rhyne said.

To date, most of the manholes included in JEA’s footprint have been relined. CCI plans to have all the manholes in the project relined by mid-2005, Rhyne said, estimating that there are approximately 500 manholes left to reline. “We’re still working on manholes because [JEA] did a lot of the pipe upfront before it began to line all the manholes.That’s why there’s a little lag time there,” Rhyne said. “It’s been a great project and very successful,” Rhyne said. “JEA, number one had to do it, but by all accounts, it saved an enormous amount of money over open-cut to repair the sewer. And it certainly did it in half or less the time.”